The last weeks of August are when tomatoes are at their peak in my region.  Jersey Tomatoes are prized for their full rich flavor after vine ripening and I happen to live in Jersey, so…there you go.  Our tomatoes are fantastic.  Truth be told I though our Staten Island, NYC tomatoes were fantastic too.  Ask my late father or my late Uncle Tony Scaramuzzi, two of Staten Island’s leading ItalianAmerican authorities and growers of tomatoes in their large home gardens.  They carried on that rivalry for years. They both grew amazing tomatoes. But I’m in Jersey where there’s a religion that worships the warm bright red orbs, big and small and this is the time of the year for them to be at their very best.  You can make sauces from them, oh yes, amazing pasta sauces but really…I’m way more interested in eating the raw product.  This is the only time of the year they will be this good.  August.  I’m not exaggerating when I say that we probably eat them raw at least once a day during the season.  While I don’t grow my own our farm markets are bulging at the seams with local tomatoes of all different varieties and your friends and neighbors who grow them in their home gardens are very generous with their bags of tomatoes as gifts for you.  I have such a neighbor.  Thanks Mike!  When I walked into the kitchen earlier today the aroma of the tomatoes I picked in his garden was floating somewhere in the air. 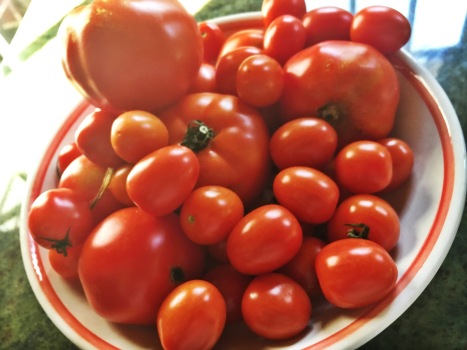 That’s when I knew it’s time for ……..PANZANELLA.  Ok, Panzanella, what is it?  Well let’s start with what it’s not.  It’s not made with toasted bread.  The bread has to get stale.That means you can’t force it.  STALE. Let it sit in a paper bag for 2 days after you buy it, and buy brick oven Italian bread, no seeds, if possible.  The  toasted bread is a crouton, delicious, but not panzanella. One problem in being authentic to the Tuscan Panzanella is the bread itself. In Tuscany the bread is salt-less.  NO SALT.   When I went to Italy the first time in 1986, my maternal grandmother, a native of Avellino told me “be careful when you travel up North (in Italy)….senza sale..o’pane senza sale..no good.”  LOL.  She was right. Saltless bread must be one of those “acquired” tastes. If all the bread you’ve eaten all your life contains salt, it’s a strange taste without it.  So unless you are baking your own bread chances of finding good Italian saltless bread is going to be a problem. Even in Italy, outside of Tuscany, they use their local breads containing salt for this dish.  This salad is a balance of bits of only a few things.  There’s a small amount of red wine vinegar that helps to soften and flavor the bread and that allows the tomatoes full flavor to shine through. Imagine, I can wax poetically over a salad of stale bread and tomatoes.  If you notice in my title to this blogpost I say Panzanella “STYLE”…that’s like a get out of jail card for me.  It allows me to be close to what’s thought of as the closest to the original without misnaming the dish.  My panzanella I made tonight contains no Cucumber. Why?  I love cucumbers.  One of my daughters loves cucumbers.  My wife?  Hates them (so misguided isn’t she?). So, since one cooks to make the diners happy I always make my version of Panzanella without cucumber.  Feel free to add it, or, stick with my Panzanella STYLE.  And put down that bottle of Balsamic. It’s not , never now or ever..a substitute for Red Wine Vinegar which is what you use in this dish.  Italy generally is fiercely regional.  Balsamic is a traditional aged product of Emilia-Romagna.  Panzanella is generally a Tuscan dish.  Not the same region so pay attention here!! Alright, enough of my lecturing on this salad..let’s make it now.

4 thick slices of STALE (remember, Stale, plan ahead her, this isn’t a salad with seasoned croutons which is what “toasting ” them in the oven would do.  coarsely chopped

3 large tomatoes, JERSEY VINE RIPENED if possible..if not, find good local homegrown or farm market tomatoes.  Dice them and leave them in a bowl.

Soak the bread in about 1/8 cup of water for 15 minutes, then gently squeeze out the water. Then season with 1/2 tsp Sea salt, 1/2 tsp Black pepper, 2 tbs, Red Wine Vinegar, blend, then add 2 tbs. of the Extra Virgin Olive oil. Let this sit for 15 minutes.  Now add all the other ingredients: 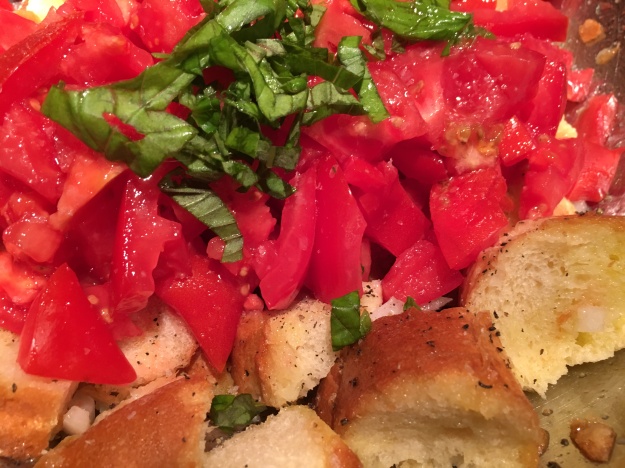 Then mix gently with…YOUR HANDS.  It’s how it’s done.  There are 2 methods, mine and then everyone elses, lol.  In Tuscany the bread is mixed by hand FIRST and then the other ingredients blended in.  I mix it all together, let it sit for 1/2 hour. Then I mix it again making sure the bread is well soaked.  Let it sit for 1/2 hour again, check for seasoning then serve. It’s that simple.  Add a drizzle of Extra Virgin Olive oil before mixing prior to serving. Fresh ground pepper over everything.

It’s hard to enjoy this out of season which is why I’m highlighting it now.  If you attempt this in the winter months,  no matter how hard you try those winter tomatoes will stay rock hard and NOT give up the juices they do in the Summer.  Those juices are the real flavor in this salad and the soaked bread delivers it to you.  Note: seasoning. At every step give the salad a taste and if something is not quite right, a little salt and pepper will correct it.