PIZZELLE SANDWICHES FILLED WITH CANNOLI CREAM FOR THE HOLIDAYS

PIZZELLES, a crisp, lightly ANISETTE scented wafer cookie that finds it’s way onto many a table of homemade treats at the Christmas Holiday Season.  It’s a great presentation and once you’ve mastered the PIZZELLE MAKER

technique you can bang these out by the hundreds.  The maker (iron) is essential and if you are a fan of these treats it’s a nice investment.  Very kid friendly  for those holiday family cookie making kitchen events.  Most makers start around 39.99 or so and can be purchased in a single iron or in the double iron (worth the extra money) and can be found on line or in specialty kitchen stores. So what’s the PIZZELLE all about?  It’s Italian and they are made all over Italy today as well as in Italian-American homes.  However, they do have a precise point of origin and that is the ABRUZZO in Central Italy.  The Abruzzo is a region that straddles the North and the South in terms of culinary traditions but I’ve always felt that it favors the South in it’s foodways.  The powerful pagan mixing with Catholic traditions is a driving force in Italy and there is much talk that the pizzelle is a traditional sweet that originally was part of the feast of one of two saints. The cult of San Domenico in Cocullo or the cult of Beato Roberto in Salle both claim the pizzelle.  I’ll go with the San Domenico story because of this: 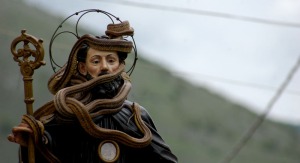 You’re not seeing things, apparently S.Domenico is a magnet for snakes (I’m a fan of the cheesy movie SNAKES ON A PLANE too so this is right up my alley) and they are used in the annual Procession of S.Domenico di Sora every May slitthering up and down the statue.  Another example of snakes as the evil serpent and S.Domenico as the one who restored the area to good clean living.  AND..the pizzelle was created to celebrate the triumph of good over evil.  Don’t quote me as this is one of many legends regarding the crispy pizzelle but chances are somewhere in the history books there’s something to how and why they were originated.  The Anisette flavoring which is so popular may not be part of the original flavoring.  That might have simply been a non flavored wafer since there are now ones made with Vanilla, Anisette (my preference), Cinnamon, Lemon, Orange, Chocolate..the usual Italian suspects.  Since I’m giving you a recipe with Anisette, and then giving you a Sicilian cream to fill it with this version clearly is not authentic nor is it Abruzzese but like myself, an Italian-American mix.

Let’s start with the cream, enough to make 25 or so Pizzelle sandwiches.

1 1/3 cups SIEVED RICOTTA (drain it thru a Cheesecloth for at least 5 hours, or find a fresh made type, use whole milk Ricotta, if your Ricotta is thin or loose it will affect the creme and not be suitable for a sandwich between 2 crisp pizzelle.  The way to correct the excess moisture is by sieving it, not difficult, Cheesecloth though is needed)  If you have access to small amounts of IMPASTATA then you are in really good shape, that’s the low moisture Ricotta used by the pros for Cannoli and ravioli but tough

Blend everything except the chip till thick.  Then fold in the chips. Chill for at least 3 hours, covered.

For the PIZZELLE..I use the Williams Sonoma recipe with a few tweaks:

FOR 25 PIZZELLE , YOU NEED TO DOUBLE THE RECIPE FOR THE 25 SANDWICHES

In a mixing bowl, whisk together the eggs and sugar until light yellow and thick ribbons fall from the whisk, 2 to 3 minutes. Add the 8 Tbs. melted butter, the vanilla and lemon zest and whisk until blended.Over a sheet of waxed paper, sift together the flour and baking powder. Fold the flour mixture into the egg mixture in two additions, folding each addition just until blended.Heat a pizzelle maker according to the manufacturer’s instructions. Brush lightly with butter and spoon about 1 Tbs. of the batter onto the pizzelle maker. If any batter oozes out, cut it off immediately. Cook according to the manufacturer’s instructions until golden brown. Transfer the pizzelle to a wire rack and let cool. Repeat with the remaining batter.
Makes about 25 pizzelle.
when the pizzelle are completely cooled, ASSEMBLE right before serving or the wafers will get soggy.  Simply and gently spread no more than 1/8 inch of the creme between the 2 pizzelle.  Dust with extra powdered sugar when serving.  An awesome Holiday /Winter Dessert especially because they evoke fresh twinkling snowflakes.

You can certainly made as many or as little as you want and only fill some.  The key is to not have a loose filling and not to overfill.