As long as there are tomatoes in season I will be cooking, eating, creating, and blogging about them, no apologies.  Winter will be here soon enough and I’ll be wishing the smell of a sun blessed ripe tomato is punching me in the nose.  Everything about the tomato plant seems special to me, they remind me of growing up, of my Dad and Mom and our big vegetable garden.  They remind me of growing up in Staten Island where not only Italian Americans but it seemed EVERYONE had a tomato they grew themselves that they were proud of.  Gifts of tomatoes in shoeboxes or those old school wooden baskets mushrooms used to come from or a paper bag. They would be filled with different varieties of tomatoes that people proudly grew in their yards.  For as long as I could remember there was an ongoing rivalry between my Dad, Peter (Pietro) Battaglia and my mom’s brother, Uncle Anthony (Tony) Scaramuzzi.  When we would visit their house or they came to ours during the Summer both men would stubbornly argue over who had the biggest, the sweetest, the best, the tastiest, the largest crop and the argument would spill out into their gardens where after awhile they both simmered down and it was back into the house and we were seated around a dining room or kitchen table…eating something that my mom or Aunt Grace Scaramuzzi would make.  By the way, my mom always had a great table of food and lots of it, but Aunt Grace would match that 100 fold..veal cutlets on platters, tomatoes, macaroni, meatballs..these things would all parade out of her kitchen endlessly, effortlessly and lovingly.  Everyone should have had an Aunt Grace. 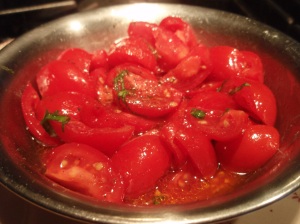 Well this love for tomatoes is not only from my 100% Italian DNA but from nuturing.  It was/is the most important item grown in the season and would factor in everything we ate in all 4 seasons.  Interestingly enough the Italian practice of canning the tomatoes at the end of August was not done in our home.  We had tomatoes right thru Oct, although those end of Sept. ones were sometimes pretty homely.  Instead my parents would cook them down thru the season and freeze them. I have zero canning skills, maybe one day I’ll learn.  We also used the Italian plum tomatoes, back then the San Marzanos from Italy were not really available like they are today.  Canned tomatoes, the good brands, are excellent products, don’t ever turn your nose up at them.

Well what are we going to cook/make today?  CROSTINI is what.  Are you confused?  Did you see that picture at top and say..it’s a type of bruschetta he’s making.  No, no it’s not.  When I’m not in the room call it whatever you like, while I’m pontificating here I stick with the hardcore actual terminology.  A Crostini is a thin piece of Italian bread which is toasted, the word really translates to “crouton”. Crostini are generally brushed with olive oil then toasted, then topped with a variety of ingredients.  A BRUSCHETTA is a piece of bread which is toasted over OPEN FIRE, like coals, it is then rubbed with raw garlic, then drizzled with good olive oil, seasoned with salt and pepper, sometimes topped with greens, cheese, tomatoes or just warmed and served with the garlic and oil. So, WHAT DO YOU MEAN??? BRUSCHETTA IS NOT BRUSCHETTA?  Well yes and no , the American version with the tomato salad topping is sort of a combo of the two Italian toasts.  My style is to give you the real deal, not to knock what we’ve come to know, but simply to give you the info and hope you enjoy the ride. My back is turned now..(I know you are calling it bruschetta…LOL)

Don’t let the time fool you, you will be prepping the tomatoes and the Goat Cheese first and letting them sit and develop their flavors while toasting  and seasoning the bread.

1 cup softened mild Goat Cheese (if that is not to your palate, use a natural whipped cream cheese)

2 tbs. Extra Virgin Olive Oil plus some for brushing the CROSTINI

In a small bowl beat the goat cheese still creamy, then add the lemon juice, pepper, and onion, blend in well.  Cover and set aside.  No salt??? It’s in the cheese,  Taste it.  Think it needs more salt? (since all cheeses are made differently) Then add more salt, not too much but only you know that.  Instead of giving you a recipe where you salt, then taste then say..this stinks..now it’s too salty, this method works for me.  I can’t gauge the saltiness of whatever cheese you are using so, mix, blend, taste then salt if you need to.

Slice or Quarter the tomatoes in a bowl.  Add the Olive Oil, salt and basil. Mix.  TASTE. Leave this loosely covered also, along with the cheese for about 45 minutes.  Flavors are getting happy now.  If you eat it at this point, it will never be as good as leaving it to blossom.  Big kitchen tip for you there.  Let the flavors develop.

NOTE: Big mistake when people make Crostini/Bruschetta..the bread is cut too thick.  Between the topping and the toasting when it’s too thick you bite into it and it collapses onto that nice piece of clothing you are wearing, or onto the floor or onto the furniture.  A thinner piece is not only safer is more elegant)  Brush the tops and bottoms of each one with just a bit of olive oil..we don’t want to make grease bombs out of these.  Toast on a baking sheet for 15 minutes in a 350 degree oven.  Rotate them at the 7 1/2 minute mark. If you see browning before the 15 minutes is over remove them. Let them cool on a rack.

Now, spread the tops of the crostini with no more than 1/8 or less of the cheese.  Arrange on a bed of Mixed baby greens. 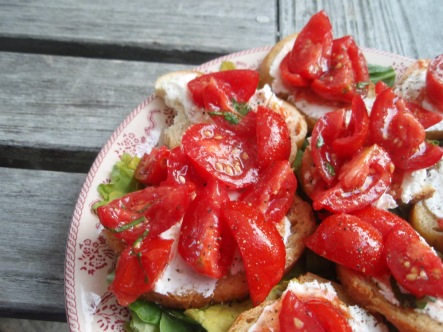 There you go.  Summer on a plate, a full meal as is (yes, a full meal!) or a party or dinner party platter, a starter, something to fill a buffet table up with but absolutely a bomb of subtle flavors.  Are you wondering WHERE’S THE GARLIC??? or more ONION in the Tomato mix?  Here’s my opinion on this..you already have the delicious onion flavor in the goat cheese, why have that fighting with garlic or onion in the tomato? Let the tomato, olive oil and Basil be the start of that show.  It’s balance.  American Italian food too often is excessive everything and dishes become one note affairs.  Try it my way, just once..I think you’ll be hooked.  If not, chop 2 cloves of garlic into the tomato too and enjoy..but try it this way..Happy Cooking! 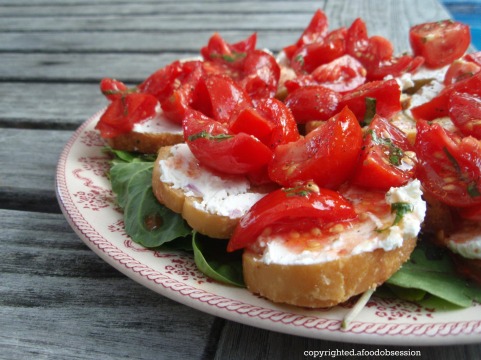 4 thoughts on “CROSTINI WITH CHERRY TOMATOES AND GOAT CHEESE”